We welcome relevant and respectful comments.
The BFS Club reserves the right to edit or delete any comments without notice. This comment policy is subject to change at any time. 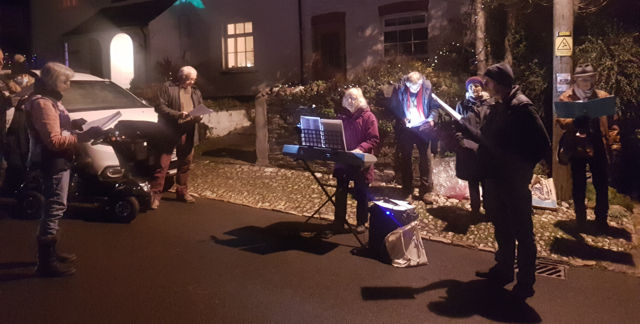 The traditional carol singing, round the village of Bere Ferrers, could not take place this year so an alternative plan was devised to provide a wonderful evening of singing together, safely and socially distanced. Two places were chosen where villagers could join together to sing carols, the War Memorial and the Club car park, around the Christmas tree. 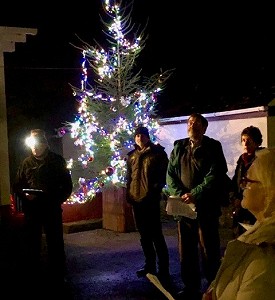 On Sunday 22nd December some 40 people met at the War Memorial, well-spaced, in family groups or their bubbles. The rain had stopped and the Christmas lights sparkled! Ann Parsons had brought her keyboard, Jane Musgrave had her guitar and Rev. Nick Law told the Nativity story between leading the carol singing supported by the rousing voices of the Tavy Tars. Carol sheets had been emailed to all so those attending could confidently join in. Sarah and Ted from the Old Plough Inn brought out mulled wine and mince pies for all to share.

It was then time for all the musicians and singers to move on to the Club where yet more villagers joined for the rest of the nativity story and further carols around the enormous, brightly lit Christmas tree. This time it was the Club Committee that provided mince pies and mulled wine to end a special evening and just before the rain started again!

Christine Poole had organised a collection for South West Children’s Hospice and she is delighted to announce that this lovely carolling evening raised £155. She would like to thank everyone who took part, gave so generously and made this communal festive occasion so successful.